Don’t take my word for it, though. Only it can do itself justice.

The companion book, Humans of New York Stories, came out a couple of months ago. I cannot recommend it enough. Brandon, his subjects, and the entire HoNY community are immensely open and giving. It’s beautiful. 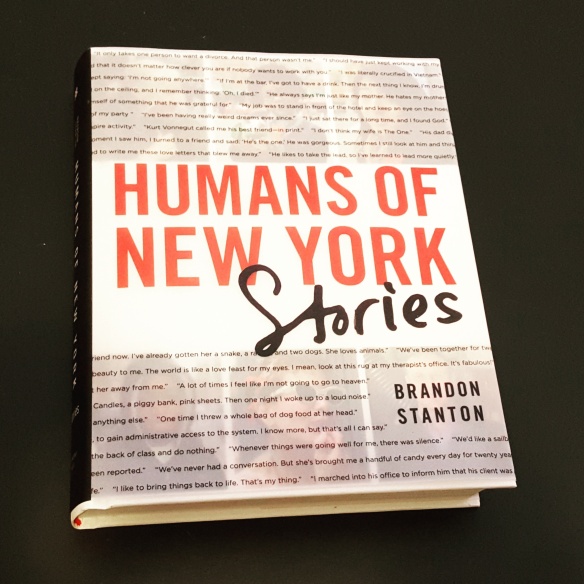 A man and woman are having a conversation; but it is no ordinary conversation, for they are flirting! The opening of Chapter IV finds Our Heroine, Anne Hartley, and her train buddy, Peter Foster (a.k.a. Nice Young Man), engaging in flimsy banter about…nothing particularly interesting. Perhaps this is just the nature of flirting? Only the participants find it amusing or gratifying.

“You don’t look like the type to be ordered about.”

“I suppose now you do the ordering?” He chuckled with amusement. “I’d love to see you in school. Tell me, where is the school? Can I come and see you there one day?”

“Indeed you can’t! You’ll probably get me the sack.”

“I shall hang about for you till you come out, then.”

“Laughter played around Anne’s lips. “Not if I know it, young man!” she thought.

Someone needs to tell Peter that joking about stalking is never attractive. Of course, neither is lying about being a school teacher when one is actually a lingerie model; but he doesn’t know that yet. I wonder how long Anne will be able to keep her “secret” from her fellow house-guests? She appears in adverts. Shouldn’t someone recognize her?

After what seems like hours of chit-chat, it is finally time for dinner. Seating arrangements at country house-parties are strange, mysterious things–at least to us mere mortals. However, obvious plot devices are much easier to fathom. Our Heroine is, therefore, seated between Robin and the Nice Young Man. Because, of course she is… END_OF_DOCUMENT_TOKEN_TO_BE_REPLACED

Two women are having a conversation; but it is no ordinary conversation, for they are worried! Or, rather, the one named Anne Hartley is worried. Felicity Winton is more concerned with the state of her manicure.

Several useless dialogue tags later, Anne is still melodramatically wringing her hands over the lateness of her boyfriend, Robin Gunter. How very English. I’m pretty sure she is the Girl About Town of the title, and that the town in question is London.

At this point, I’m starting to think that poor Robin and his scarlet-and-black racing car are mangled somewhere in a ditch. How will Anne and Felicity make it to the party for which they are preparing, if Robin and his fancy wheels don’t escort them? The answer is, surprisingly, a bus.

Someone, it seems, is dating above her station. Cripes!

Nope, scratch that. A paragraph down we are informed that, although Robin is of the moneyed class and Anne is but a lingerie model (the horror!), they are social equals. How is this possible, you ask? It involves a boring story about dead parents, a wealthy aunt, and our plucky heroine’s very modern determination to make it on her own in the city rather than being stuck living in the country on the sufferance of her relations.

I’m pretty confident that this “social equals” bullshit is going to come in handy later.

Oh, and Robin is not dead! His sexy automobile is also, presumably, fine.

“Why, Felicity!” She turned round sharply as Felicity came into the room and closed the door behind her. “What is it?”

“It’s his mother. She wants to see you. I’ve shown her into the sitting-room.”

Mama Bear Gunter, it seems, does not want her handsome and dashing cub to marry a poor, tacky-ass model.

“There was going to be trouble and no mistake!”

Mrs. Gunter has sent her son to Cannes, far from the fleshy temptations of “A girl of your class! A girl whose figure is displayed in every newspaper. It’s common! Cheap! Vulgar!” What’s more: Robin has no idea that his dear mother is visiting Anne.

Things just got really real, y’all. (I’ve never written or spoken the word “y’all” before, but it undeniably fits here.)

Then, much to my surprise, our girl Anne stands up for herself!

“How dare you speak to me like that? she cried hotly. “What right have you to come uninvited into my flat and behave like this?”

She continues yelling at her newly-minted nemesis for an entire page. Mama Bear knows that Anne speaks the truth, but, instead of having an adult conversation with her, leaves in a haughty, upper-crust huff.

Anne knows that Robin is out of her life forever!

It’s an entire year later. Never fear, though, because Anne is realistic and level-headed. Pink geraniums are blooming in the window-boxes! Everything is fantastic! She’s totally moved on with her life. Haha!

“I told you you’d get over it in time,” said Felicity.

“And you were right,” agreed Anne, but in her heart she knew that Felicity was not right. She had not yet got over her love for Robin.

What are the odds that Robin is really an insufferable ass? There is just no way that this guy is all that Anne makes him out to be. And even if he is, has she already forgotten about his mother? Run, girl, run.

Hey, what’s this? Oh, just a timely letter from Anne’s wealthy Aunt Alicia inviting the former to a house-party in the country. Anne’s cousin Muriel is coming of age. This is highly important and must be celebrated with other rich people. END_OF_DOCUMENT_TOKEN_TO_BE_REPLACED

My copy of Girl About Town has some interesting, and unusually informative, marginalia.

At one point, it belonged to “College Libraries” (“The Convenient Reader Service”) in Dayton, Ohio: 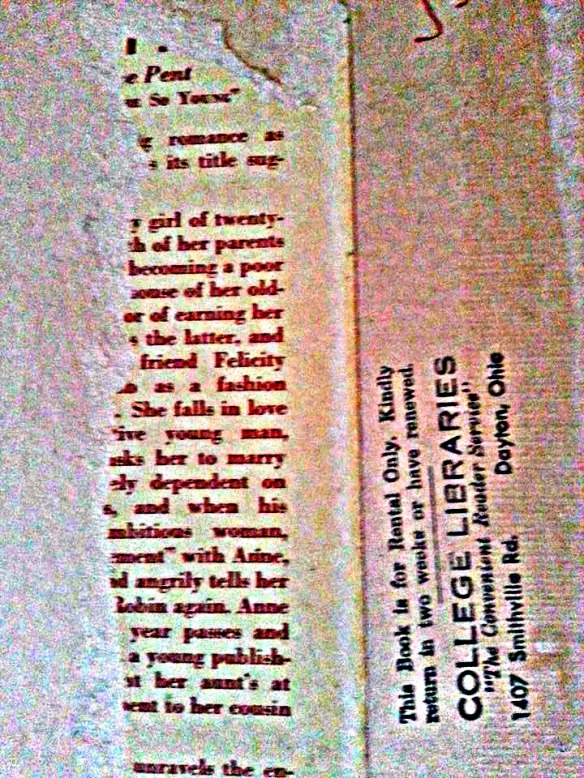 Fortunately, it doesn’t say anything about not using their property as a notebook. Otherwise, someone would have been in big trouble…and we’d be out a lot of useful information: 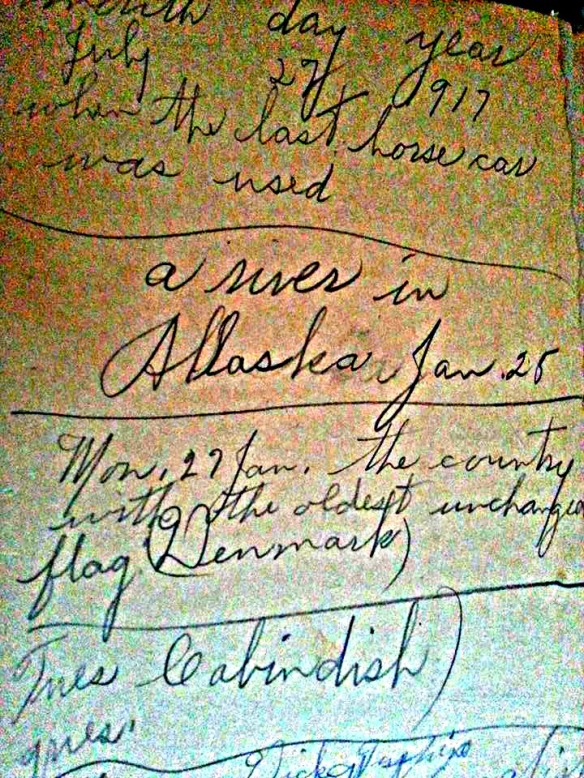 the country with the oldest unchanged flag (Denmark)

Things go a bit downhill from there: 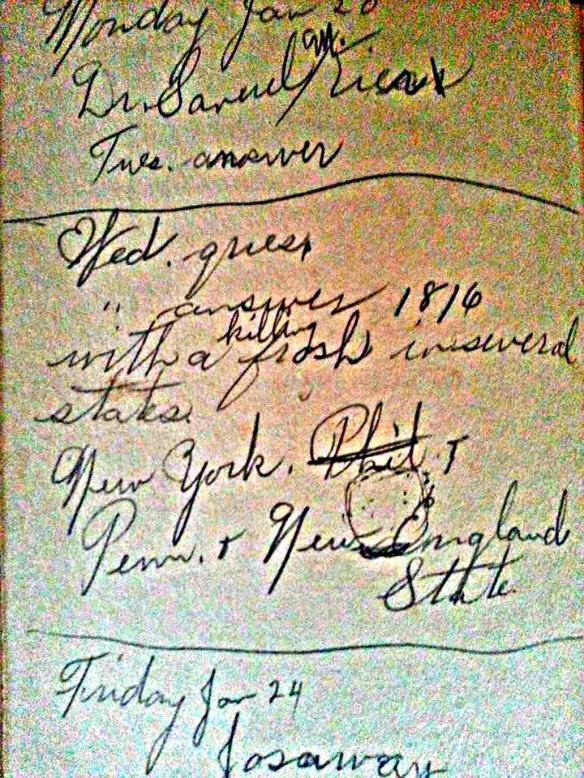 “answer 1816 with a killing frost in several states”

I’m a bit concerned about this unknown person’s grades. Was geography their weak subject? Were they hung-over that day? Did they even pass this class? What profession did they go into after (their hopeful) graduation? How did they manage to bring a novel about lingerie models to school, but not a notebook? So. many. questions. And I haven’t even started reading the actual book…

Next time: Chapters One-Three of Girl About Town

“A bright, entertaining romance as modern and up-to-date as its title suggests.”

I’ll be the judge of that.

Musty-smelling old books are my jam. The ones I like best have beautiful designs carved into worn hardbacks, patterned endpapers, and thick pages sporadically covered with obscure marginalia. They come with secret histories, impenetrable and mysterious pedigrees of ownership that are all but untraceable. The physical books are weighty, concrete treasures unto themselves. But what of their contents?

They vary, of course, from the sublime to the mundane, from classics to curiosity pieces. All are miniature time capsules. For that alone they have value.

In related news: I want to read all of these books. Maybe you do, too. What an impossible dream to have, my friends! It’s never going to happen.

I won’t stop buying them, though, as they are so lovely, enlightening, enchanting, entertaining, affordable, plentiful…

Thus was born the idea for the newest regular feature on A Small Press Life. 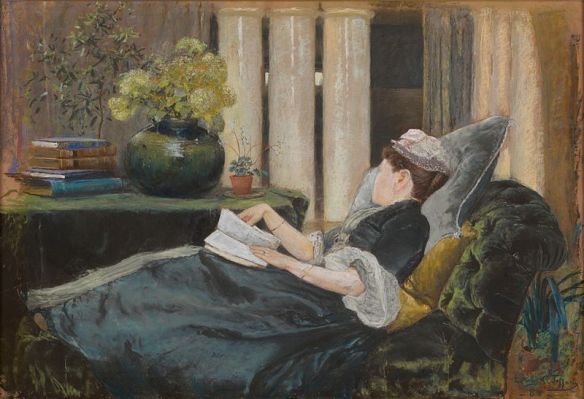 It’s simple, really: follow me as I read and review a musty-smelling old book, a few chapters at a time, from start to finish. I’ll not be reading ahead–my impressions will be fresh, off-the-cuff, and (hopefully) witty and intelligent. What say you, dear readers? Shall we throw the spotlight, once again and however briefly, on some fine, fun, and largely forgotten old books?

Let’s do this thing!

Most of these are pretty, unintentionally hilarious.

Still no functioning Internet connection, thanks to ye olde goblins. Here’s a pile of books waiting to be reviewed upon its return. 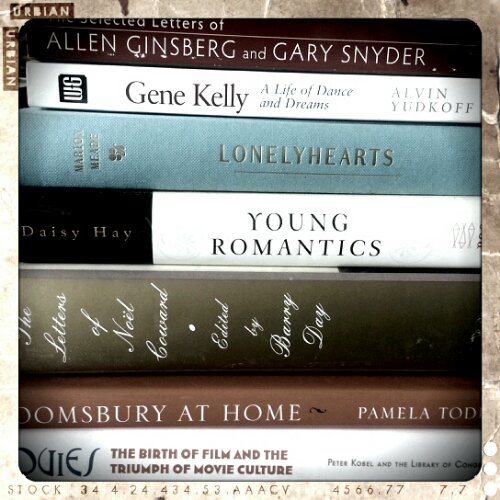 Since I do not own a copy of Dorothy L. Sayers: The Centenary Celebration, this entry qualifies as a bonus review.

FRONTIER MADAM THE LIFE OF DELL BURKE, LADY OF LUSK