I do the blogging for a local gallery chain. We carry a lot of Charley Harper pieces (as in, the most in the world). Nine months ago, this would have meant absolutely nothing to me. Even though I’ve moved (mostly) in and (occasionally) out of the art world for the bulk of my adult life, I had barely heard of him before starting this gig. Back in “the day”-in this case the 1950s onwards-he did a lot of illustrations for a  magazine called the Ford Times, which I had definitely never heard of. Even though I love old periodicals. (I think I can be forgiven for not reading old copies of a lifestyle magazine put out by the Ford Motor Company, right?) Anyway, I will try to wrap this up in a neat, figurative bow because, well, this is a diversion piece. As we know, in my universe, that constitutes a few sentences and a photograph or two. Moving on…. 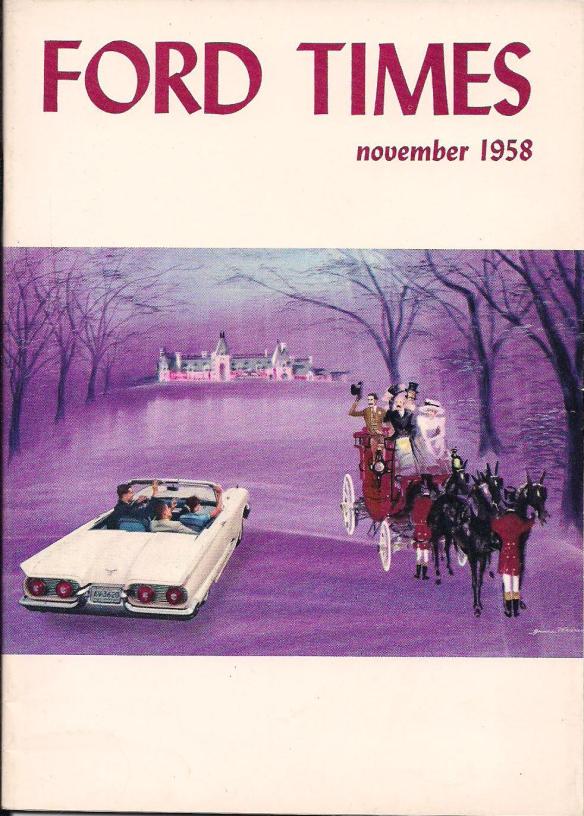 I met a delightful old man yesterday afternoon. After he found out that I sometimes write about Charley Harper, he gave me this excellently preserved copy of the Ford Times. Although I have seen most of the prints made from these illustrations, I had never seen the magazine before. I had no idea that it was so small! I thought that it was a full-sized periodical.

He didn’t just gift me with any Ford Times issue, but one that featured some of the images I have written about. I love the flying flamingo in the background of the top illustration.

This layout makes me want to go camping, badly. But only if I can have that awesome car and the sweet tent, which actually makes setting up camp look fun! This story alone made my day (I’m weird like that). Thank you, Mr. Old Man! Your gift is in good hands.