When I was fifteen, I learned the truth behind Norma Desmond’s famous Sunset Boulevard assertion: “We didn’t need dialogue. We had faces!” Six decades of repetition has eroded this cutting indictment to a fragment of its original self, denuded of meaning even as it has become a pithy pop-culture sound bite that the least film savvy person can repeat with cocksure swagger. My enlightenment came in the form of a dusty, jacket free old book crammed with its fellows on a shelf at the public library. Subject: silent movie star portraiture. Impact: sudden, immense, striking. A well-established love of the arts, history, and old movies hadn’t prepared me for what I found in this neglected volume of photography. Questions rushed my senses: Who were these women and men? Why was their beauty sung not to the heavens but inarticulately whispered of in a suburban teenager’s bedroom? What happened to them? When did  mystery and imagination leave entertainment photography, resulting in the garish, empty images that had engulfed my recent 1980s childhood?

TWO OF MY EARLY FAVOURITES: 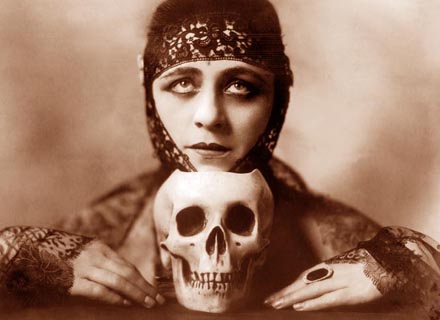 The trajectory of my life changed the day I checked out that book. A passion for old movies expanded to include silent films. I watched as many as I could find, and read everything available on the subject in our large library system. Result: hooked, permanently. Bonus: growing up to write about what I love, including silent movie culture.

Amidst the flavors of the day and luckless publicity seekers, the stars whose fame flamed into the sky with the spark and longevity of an uncontrollable firecracker, and those with fleshy charms but little talent, there stood performers with skill, magnetism, and dedication to a craft that was being forged as the cameras rolled. Some are remembered-if only for the persistence of their images in twenty-first century advertising-but most are forgotten, their work rarely seen by the modern masses. In a world where Mary Pickford has been reduced to the curve of her curls and Lillian Gish to her shy, arcane smile, where Charlie Chaplin is nothing but the sum of the sartorial trio of hat, cane, and shoes, what chance does Mabel Normand stand to be recognized and appreciated as a first-class artist? Even her lovely face is a fading footnote. 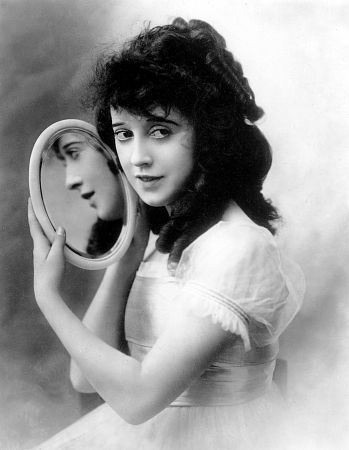 Some people connect with the camera. The nativity of why this should be for Person A and not for Person B is ultimately unfathomable to naked observation or thought, and is a joy whose mystery is best left alone. Mabel was thus blessed. She was magic.

Wide-eyed and hoydenish, her carefree, uninhibited attitude transferred perfectly to the screen. Like many early film performers, she learned as she went along. Mabel was a quick study who was abundantly endowed with excellent timing and a plastic, expressive face and body. Her gestures: controlled, lovely.

The expressive Mabel Normand in Joan of Plattsburg, 1918.

Mabel and her boss/lover Mack Sennett were the premier battling, will-they-or-won’t-they couple of the 1910s. After years of waltzing around the subject of fidelity and permanence, the relationship was over in a flash. The real truth behind the final breakup remains unknown, but once it happened there was no going back. At least not for Mabel. Mack tried to change his ex-sweetheart’s mind. His main enticements were the promise of her own production company and the film Mickey. It didn’t work, but movie culture is all the richer for his ham-fisted, lovelorn efforts. 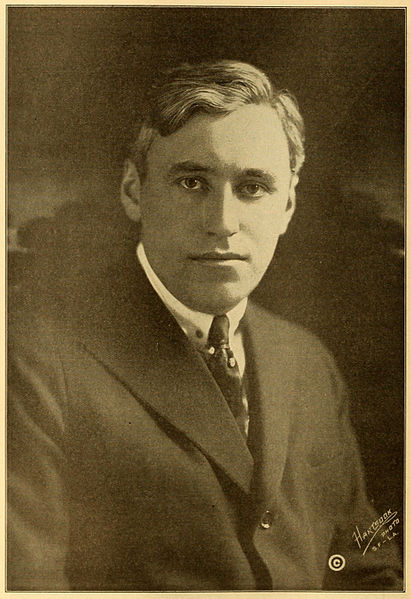 A handsome Mack Sennett by Fred Hartsook, July 1916. His relationship with Mabel Normand was already dancing on quicksand.

Mickey finds Mabel at the top of her artistic game. She is exuberant, seasoned yet gloriously natural, touching, and full of surprises. There is no trace of emotional puppetry, which is rare and refreshing in a “big” picture from a comedian/comedienne (Buster Keaton did not indulge in this alluring con, either). No manipulation, just a girl named Mickey. Let me introduce you.

Mabel Normand in Mickey (1918). The Little Girl You Will Never Forget.

Mickey is a young woman, an orphan raised by her late father’s business partner, Joe (George Nichols) and his housekeeper, Minnie (Minnie (Ha Ha) Deveraux). She is the co-owner with him of the unsuccessful Tomboy Mine. Just like their business venture, she is rough and tumble and unpredictable. Mickey lacks manners and decorum-as one would expect of a lass raised around miners-but she has a good heart. As with so many other movie tomboys, she loves animals and meets bad luck with plucky resourcefulness. Our heroine isn’t above lying to save her own hide, nor does she feel guilt in doing so. Her life, however,  is about to change. Country dwelling movie characters on the distaff side have a habit of falling in love with handsome, wealthy city slickers. Sometimes it works out, sometimes it doesn’t. Is Easterner Herbert (Wheeler Oakman) on the up and up, or is he just a heartbreaker? Before we can find out, Mickey is sent to live with her only blood relatives: her scheming aunt and equally voracious cousins, formerly rich but now fallen on hard times. 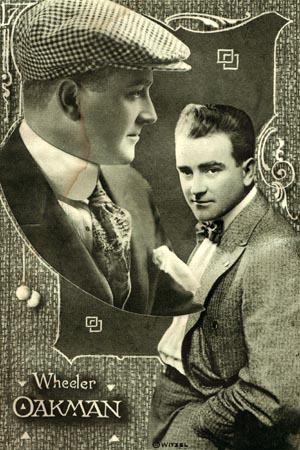 Wheeler Oakman by Witzel. Mickey gave him the rare opportunity to be  a romantic lead. It paid off in a charming characterization.

The story is based on two classic silent film devices-the battle between West Coast naturalism and cunning East Coast materialism and the fish-out-of-water saga. From here, the action takes off and the plot thickens. The real villain emerges. Mickey’s future is in jeopardy, her love life precarious. Will happiness prevail or will she be consigned to a violent, hapless existence at the hands of her greedy relations? Comic jams and cozy interludes are peppered throughout. The climax, although of its time, is daring and breezy. There are heroics and fisticuffs and a fine comeuppance. Spoilers: not on your life! This film is Mabel’s greatest triumph, and as such it deserves to be watched and enjoyed a time or three. There are so many fantastic pieces of truly subtle “business” in silent movies that repeated viewings are necessary, even to trained eyes. Rest assured: when Mabel Normand is in the building, you will be doubly rewarded.

Mickey is a delightful romantic comedy romp designed to fit Mabel’s strengths.  Her wondrous yet never over-the-top physicality is just plain fun to watch, as she moves from mining town to drawing-room, servant’s quarters to horse track. Changing the locales so rapidly keeps the action fresh and provides Mabel the real-life clotheshorse the opportunity to, quite literally, try on different corporeal personae and their accompanying outfits: poor but happy orphan, girl in love, feted relative, maid, jockey, damsel in distress, etc. Through it all, she never loses her fresh, brave, optimistic outlook. She is still our Mickey, our Mabel. Unforgettable.

Mabel Normand’s magic sticks with you. A true original, her performances are timeless, human, riveting. Innocence is not a word much associated with Mabel, but it is apropos in this and all of her work. It is not the bright innocence of purity that surrounds her contemporary Lillian Gish like a shroud, but the simplicity of unfettered openness, of organically living one’s life to the fullest without heeding the false boundaries erected by society. Watching Mickey-or any of her pre-1920s films-makes one forget the tragedies and bad choices that were to litter the rest of her life. When she lets loose on the screen, it is an inextinguishable victory. Time decays bone and muscle, but celluloid preserves the spirit. She wrote and directed countless shorts, the extent of which will probably never be fully realized or lauded. As an active creator, in front of and behind the camera, she was a major force in the development of film comedy. She was the real deal.

TRIVIA: LEW CODY BECAME MABEL’S REAL-LIFE HUSBAND IN 1926. HE OUTLIVED HER BY FOUR YEARS. MINTA DURFEE WAS MARRIED TO ROSCOE ‘FATTY’ ARBUCKLE FROM 1908-1925. THE SONG MICKEY, INSPIRED BY THE FILM, BECAME A BIG HIT. MABEL WAS SICK THROUGHOUT MUCH OF THE PRODUCTION, WHICH BLOATED THE FILMING TO TWO CALENDAR YEARS.

THE YEAR IN CURRENT EVENTS, BRIEFLY:

Mickey represents the acme of Mabel’s career. It is the number one film of 1918, grossing a reported $8,000,000 worldwide on a budget of less than $250,00. A fast-paced escapist heart-warmer, it is an antidote to the flag-waving films of a war-weary and disease-ridden world. Society is changing, and so is the face of comedy. Millions have lost their lives to World War I and the global influenza outbreak, and women around the world are slowly gaining the vote after years of vocal and increasingly violent agitation. Charlie Chaplin is scaling the ladder of fame ever higher (due in no small part to Mabel’s counsel and direction) and Harold Lloyd and Buster Keaton are almost ready to come into their own as comedy giants. Time Zones are established in the United States. Moscow is named the capital of Soviet Russia. World War I finally ends.The Romanovs are executed. Births: Ida Lupino, Rita Hayworth, Teresa Wright, William Holden, Marjorie Lord, Cameron Mitchell, Jeff Chandler, Anne Shirley, June Duprez, Sebastian Cabot, Robert Preston, Jane Frazee, Ingmar Bergman, Evelyn Ankers, Robert Walker, Baby Peggy. Deaths: True Boardman, Myrtle Gonzalez, William Courtleigh, Jr., Harold Lockwood. New book releases: My Antonia by Willa Cather, Eminent Victorians by Lytton Strachey, and The Magnificent Ambersons by Booth Tarkington. Notable inventions: grocery bag; French dip sandwich; torque wrench.

THE YEAR IN MOVIE PERSONALITIES: A SELECTION

THE YEAR IN MOVIES: A SELECTION

I hope this little essay gives you the courage to kill the lights, sink into the couch cushions, and open your mind to a movie from another era. Reward: timeless entertainment.

Thanks to Movies Silently, Silver Screenings, and Once Upon a Screen for creating and graciously hosting this movie marathon! Visit each of their sites for a full list of participants.

Note #1: Then as now, film fame was often fickle and brief. Stars who were a top attraction one month, could be thrust back into obscurity the next. This was never truer than in the 1910s. I’ve highlighted in the slideshows only those personalities whose careers had staying power for at least a couple of years. Still don’t see a favourite? Time and space are limiting entities; I had to leave off a lot of wonderful performers, including some of my favourites. That’s just how the cookie crumbles.

Note #2: In order to avoid redundancy, personalities are included in only one slideshow. Example: Douglas Fairbanks is represented by his film, Arizona. As thus, he is not featured in the selection of film stars. Buster Keaton is the exception because, of course, he is above my petty rules.

Buster Keaton does not play my games.

30 thoughts on “[The Classic Movie History Project Blogathon] 1918: The Magic of Mabel and Mickey”